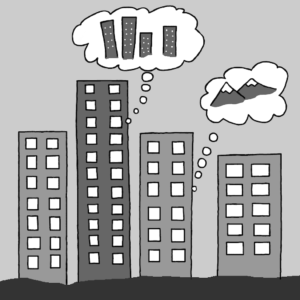 “This hotel is quite an experience,” said David, wide awake, staring into the empty darkness above the bed.

“Uhm,” murmured Carmen, somewhere from the land between sleep and consciousness.

“Isn’t it amazing that you can feel the altitude, even if you’re not even looking out the window. You just feel it. It’s there in your body, your bones, your guts. That high riding feeling. It’s just there.”

“I mean, what is it? What makes you feel the altitude? Is it because you know you’re high up and have seen the views before and the mind just paints the picture on the back of your eyelids? Or is it gravity? Because it’s so strong up here? Or maybe because it’s weak? I don’t know. Could also be sounds. I mean, you can hear the sounds coming from far below. Really far below. The sound-waves hit your eardrums at a narrow angle and the brain says wow, that’s a really narrow angle and therefore the sound must be coming from really far below. I don’t know. Could be a combination of all these things? I don’t even know if it is psychological or physical. Or some kind of a weird psycho-physical mixed-reality experience.”

“Whatever. Can we talk about it in the morning? I’m kind of tired.”

“Sure,” said David, reluctantly letting the subject go, silently keeping on thinking about it, though, keeping on feeling, feeling the altitude, feeling the gravity, being amazed by it, listening to the sounds from far below, hitting his eardrums at an unfamiliar angle, fascinating angle, keeping him wide awake, blowing his mind, causing him to go on thinking in circles, about the wonders of altitude, gravity, trigonometry, psychology, physics, and gravity again, all in circles, until finally, in the early hours, also becoming tired, falling asleep, just to wake up a few hours later, on the ninth floor, without feeling anything, just waking up in a hotel room like any other.