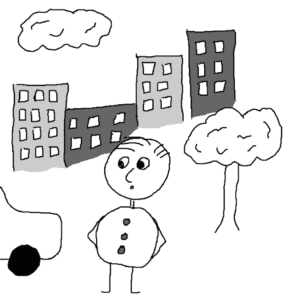 I walked out of the office building after a full day of meetings. I was mentally exhausted, but craving for physical activity. I needed to release some of the static energy that had been building up in my body during the day and turn it into mental energy. Rather than going directly to the nearest underground station and taking the first train home, I decided to walk to a station further downstream along the route.

As I walked through the park across the street from the office, I could feel the fresh breeze rinsing my lungs of the stale meeting-room air. I enjoyed watching the squirrels run and listening to the birds tweet. When I reached the street on the other side of the park, my shoulder muscles relaxed, I straightened my back, lifted my head and started a mindful observation of the world around me.

After one sweep across my surroundings, I felt a knot in my stomach. My mind jumped to last week’s terrorist attacks. My brain started racing. Was it safe to be in the streets? Was I doing a stupid thing? Was it a folly to take such an unnecessary risk? Was I insane to deliberately expose myself to the terrorists — to their vans, knives and explosives?

I felt my muscles stiffen, my heart beat faster, my breathing become shallow. I distrusted people with backpacks. I felt wary of white vans. I feared crossing the street. My mindful observation was replaced by paranoiac scrutiny. I turned around and rushed as fast as I could to the nearest underground station.