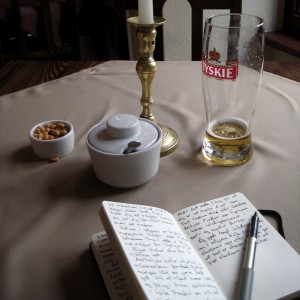 Javier sat by the window overlooking the square. He watched a leaf floating in the air powered by a gust of wind that had forced itself between the buildings surrounding the square. He felt that his own existence was like a leaf in the wind. He did not know where he was headed. He did not know which steps to take in his relationship with Lydia. He did not know what she wanted from life. He was not sure if Lydia knew what she wanted. She tactfully avoided talks of marriage and children. She seamed to be happy with floating in some sort of undefined void. Javier did not want to be a leaf in the wind. He wanted to be a trunk with his root firmly dug into the ground. He wanted to get serious. He wanted to lay out a plan for the future. He and Lydia had been together for five years. They were both approaching the end of their twenties. It was time to move the relationship to the next level. Move on. It was time to get married. It was time for children. It was time to start a family. Yet he hesitated. There was something holding him back. Some sort of fear of commitment. Perhaps a fear of Lydia’s lack of commitment.

Javier was startled when Steve came and sat down at the table. They had decided to meet at the café and work together on an assignment related to their studies.

“You look as if you are lost in your own thoughts!”

Steve seemed cheerful as usual — relaxed and nonchalant. Javier wished he could be so laid-back. He wished he could be more like Steve. Not that he knew Steve very well. They had met for the first time a few weeks ago when they registered for the same course at the university. They had collaborated on a few course related assignments. Their relationship up until now had been mainly professional.

“Oh, well. I was just thinking about life and the future and such. You know. Commitments and stuff.” Javier forced an awkward smile to try to match Steve’s nonchalance.

“Sounds interesting,” Steve relied rather unconvincingly as he waved the waiter and ordered a beer in a sign language. “The future, you say. The future is bright. Beer on it’s way and stuff.”

Javier suspected that it would be rather hopeless to discuss serious matters with Steve. He was however so preoccupied with the future that he decided to continue the subject. He needed to get it off his chest.

“You don’t never think about those things? Long term commitments and stuff?” Javier asked as cheerfully as he could in order to try to hide his anxiety.

“Funny you should mention it,” Steve responded in a serious manner. “I was thinking about the same thing the other day.”

“Seriously?” Javier was surprised by Steve’s response. Perhaps there was some seriousness hidden under the nonchalant facade.

“Yes, I have had to think about these things quite a bit lately.”

Steve paused while he took a sip of the beer that the waiter had put in front of him. Javier was curious to hear the continuation.

“The thing is,” Steve said after swallowing the sip of beer, “that I have a big problem getting used to the fact that supermarkets here in Barcelona are closed on Sundays.”

Javier looked at Steve take another sip of the beer. He did not really anticipate where the conversation was going.

“The thing is,” Steve continued, “that I can only eat what I want to eat. And, I mean, that can change in an hour.”

Javier realized that he had probably miscalculated Steve. There was no seriousness hiding under the nonchalant facade.

Javier smiled. To Steve’s credit, he was funny. One should just not take him too seriously.

“So, you don’t feel your biological clock ticking?” Javier decided to try again to see if he could get Steve onto a serious note.

“I certainly do,” Steve answered with a smile on his face. “It ticks all right — but in a non-regular manner. My biological clock is just wrong.”

“Yes, it wasn’t designed to handle the year 2000. It reset itself. Rather than becoming twenty at the turn of the century, I was born again. Mentally — that is. More or less.”

Javier laughed. Steve was obviously not the right person to talk to about serious matters. Not on a serious note, at least. Yet, Javier decided to make one last attempt to see if he could get Steve to strike as false note — a serious one.

“Isn’t there nothing that you take seriously?” he asked.

“Yes, there is,” Steve replied after a moment of thought. “Humor. I take humor very seriously.”

“Isn’t that a contradiction?” Javier asked as he forced a laugh even though he did not quite understand the joke.

“Not at all,” Steve replied with a serious face. “In our times people laugh at whatever nonsense without any critical thought.”

Javier was silent and tried to digest what Steve was saying. He was not sure if he was following the joke. He wondered if he should laugh — just to be on the safe side. But Steve looked serious.

“People in general do not take humor seriously,” Steve continued. “They laugh without proper cause. They do not seem to be able to distinguish between high quality humor and cheap laughs. They will laugh at whatever.”

Javier realized that he could hardly remember having seen Steve laugh. He smiled almost constantly, but hardly ever laughed. Now, even the smile had disappeared from his face. Javier found it uncomfortable to see Steve so serious. It did not suite him. Javier decided to change the subject at once.

“So, what about that assignment we were going to work on?”