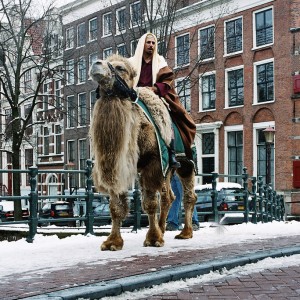 On Rokin I turned left an walked up the narrow Langebrugsteeg. It had been relatively cold in Amsterdam for the past week. It had even snowed—a rare event in this city. On a normal day I would have gone to the university on my bicycle but with the arrival of the snow I decided it was safer to walk. I also liked walking in the snow. I loved the sound of snow cracking under the sole of my boot. I guess I felt homesick. I missed the snow back home in Iceland.

Langebrugsteeg turned into Grimburgwal and the street got wider. As I approached the Sleutelbrug bridge I saw an odd sight that had yet become familiar to me over the last few days. A junkie on the bridge with a bactrian camel.

When it started snowing a few days earlier I was surprised to see how quickly the native Amsterdammers replaced their bicycles with camels. In a matter of a few hours all bicycles had disappeared from the streets. Everywhere you looked you could see people going about their business on their camel.

It can be dangerous to ride a bicycle when the streets are covered with snow—it is too slippery. Camels are better suited for snow. They have an incredibly good grip and an excellent sense of direction.

As I crossed the bridge the junkie came up to me and whispered: “Camel kopen?”. I ignored him and kept on walking. He realized I was not a native. He followed me and decided to make me another offer—now in English: “Want to buy a camel? It is only 10 euros.” I shook my head and walked on—faster than before.

Camel thefts are very common in Amsterdam. Many junkies finance their addiction by stealing camels overnight and then sell them the following day. I was very surprised by the lack of care that some people show their camels. Everyone knows that one should always lock her camel with at least two good camel-locks and always make sure to lock it to something that is fixed to the ground. Yet some people do not. Their camels sometimes get stolen.

Before entering the university building on Binnengasthuisstraat, I looked over the camel stalls. Long rows of camels eating hay and waiting patiently for the return of their owners—preparing for the ride back home. The sight made me wonder if I should have taken the junkie’s offer. I wanted my own camel.

I decided I would go to the camel rental on Dam after class and rent myself a camel. It would not make sense to buy one. The snow would not stay long and I would graduate and move away from Amsterdam before next winter.