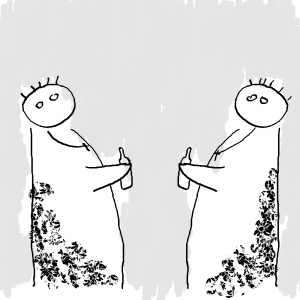 “Welcome to my new palace,” I said to Katrín as she entered the apartment I had moved into a few days earlier.

“Thank you, your highness,” she replied, winking and bowing.

I grinned. That’s what I liked about Katrín. She never took life too seriously. Yet she was also someone with whom you could talk about serious things when you needed to. In my years abroad I had never made an effort to be around my Icelandic compatriots. It was not that I disliked them. In my view there were just so many amusing foreigners here abroad that I did not have any special need to fish in Icelandic waters. Katrín was however genuinely amusing and I would make an effort to maintain our friendship.

“The bedroom, the bathroom, the kitchen, the storage room, the living room and the dining room.”

I introduced her to my new apartment as we made our way from the front door to the dining room.

“Wow, a dining room,” Katrín said with a mocking look on her face. “How impressive. Just like a proper palace.”

I looked at my small Ikea dining table. Although technically one could fit four people around it, in practice one could only comfortably fit two. The dining room did however not accommodate a larger table.

“Well, you cannot have it all. At least you have a dining room. Not all inhabitants of Barcelona can afford to waste a whole room for a dining table.”

“I would not call it a waste,” I said trying to look profound. “I would call it an investment.”

“I don’t really know,” I answered, feeling a bit embarrassed.

I really did not know. It was just one of those silly spontaneous statements I made every now and then because I thought they sounded funny. I had not really thought about what it meant. Let alone whether it was at all funny.

“Splendid. I am in the center of Gràcia. A few steps away from Virreina square. What more can one ask for?”

“No, the noise from Virreina square is absorbed by the church that is between me and the square. So it is actually rather quiet.”

“The silencing effect of the catholic church has always been strong,” Katrín said and grinned. “And the neighbors? No noise from them?”

“None at all. Not any more than in any other old building in Barcelona,” I said, trying to remember if I had ever noticed any abnormal noise from my neighbors. “Furthermore, across the street there is an abbey of monks. They are not really the noisy type.”

“Monks?” Katrín asked with a hint of disbelief in her voice.

“Yes, monks,” I replied, sounding a bit insecure since the idea of living next door to an abbey of monks had not fully sunk in to my mind and was still fairly alien.

“Interesting,” Katrín said. “They do have a nice terrace for barbecues, though. It would be a pity if they do not use it.”

There was a short silence. She was right. I looked over to the terrace of the abbey. It would be a pity if they did not use it. My mind started to imagine what it would look like with a group of monks throwing a barbecue party. In my mind it looked surreal. As I could not recall ever having seen monks in real life I imagined a group of bald men in heavy brown cloaks, drinking beer from one-liter bottles and barbecuing juicy burgers. The vision was based on an episode from The Simpsons, mixed with scenes from The Name of the Rose. It was accordingly surrealistic.

“Coffee?” I asked, trying to get the bald, beer-drinking, barbecuing monks out of my mind.

“Sure,” Katrín replied and made herself comfortable on the sofa.

I went into the kitchen and started preparing the coffee. I could hear Katrín get off the sofa and walk across the living room. I guessed she was taking another look at the view of my neighborhood.

“Do monks in Spain normally wear women’s clothing?” I heard Katrín shout from the living room.

“Sorry?” I shouted back since I was not sure if I had heard her correctly.

“I would not know,” I said as I handed her a cup of coffee and joined her at the living room window overlooking the terrace of the abbey. “I don’t think I have ever seen Spanish monks. I haven’t even seen my neighbors.”

We sipped our coffee, admiring the view. The monks’ terrace was partially covered by a roof made of semi-transparent plastic. In the roof-covered part of the terrace, the abbey’s inhabitants were hanging out laundry.

“You can see why I asked you that question.” Katrín said.

I could see why she had asked me that question. From under the roof of the terrace I could see the bottom third of my neighbors’ bodies. I could see their brown slippers, their bare ankles and the lower part of their calves, the bottom part of their dark blue skirts and their light blue aprons. The outfit was rather different from the heavy brown cloaks I had imagined some minutes before.

“Those monks of yours seem to be in good touch with their feminine side,” Katrín said after we had stood in silence for a while admiring the bottom third of my new neighbors. “Maybe they belong to some sort of cult of cross-dressing monks. Strange. For monks at least.”

“Who are we to judge them?” I asked. “They report to God, but not to the superficial fashion norms set by our modern society. If they want to wear women’s clothing it is between them and God. If God approves, they can wear whatever they want to wear. Be it heavy brown cloaks, be it jeans or be it skirts and aprons.”

“You are right,” Katrín said and put on a serious face. “We should not be blinded by our backward views of gender stereotypes. If those monks want to wear skirts, it is none but their own business.”

We looked at each other and smiled. Content with our intelligent sounding slogans of modern moral views, we moved away from the window and made ourselves comfortable on the sofa.

“Out of curiosity,” Katrín continued after we had sat in silence for a while enjoying our coffee. “Since you had never seen your neighbors before, how did you know they were monks?”

“The landlord told me.”

“What did he say exactly?”

“I don’t remember exactly what she said,” I replied, trying to remember what the landlord had said exactly. “It sounded something like monk at least.”

We sat in silence for a while. Katrín looked as if there were some elaborate thoughts forming in her mind.

“Do you have a Spanish dictionary?” she asked.

“Yes, of course,” I replied and went to fetch a Spanish-English/English-Spanish dictionary from the bookshelf. “What’s on your mind?”

“Do you know how you say nun in Spanish?” Katrín asked as she browsed the dictionary.

“Well, no,” I replied and grinned. “For some reason that word has not entered my vocabulary of everyday Spanish.”

Katrín stopped her browsing and pointed her index finger at a page in the latter half of the dictionary.

“Well, according to this dictionary of yours, the word for nun is ‘monja’ in Spanish.”

That was an interesting observation. In retrospect it was not all that surprising. It might well explain some things.

“So, you are implying that maybe my neighbors might be nuns rather than a cult of cross-dressing monks?”

“Well, I hate to destroy your fantasy of living next door to a cult of cross-dressing monks,” Katrín said with a grin, “but it is plausible that your neighbors are indeed nuns.”

“Hmm. Either way. Getting back to the original point, I do not expect the quietness of my new apartment to be disturbed by any wild parties coming from across the street.”