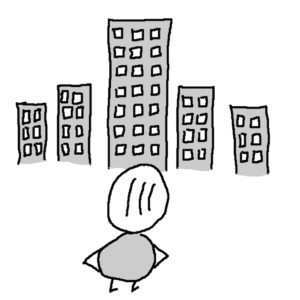 Norbert Peterson glided slowly upward from the underground, holding onto the handrail of the escalator. He was on his way to take his first peek at the completed construction of his first skyscraper. The KP-Energy Tower, or the Norbert Peterson Tower as his colleagues called it. It was the tower that could transform his career from being an architect to being a starchitect.

Once on the surface, Norbert’s gaze hesitantly followed his design from bottom to top. He crossed the street to get a better angle. He walked backwards down the street with his eyes fixed on his creation.

Norbert shook his head. It did not work. It did not fit in. The building that had looked so good on paper in his studio simply did not scale to a full-size construction.