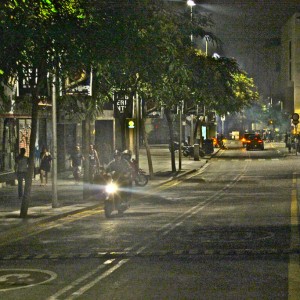 Pierre turned in his bed. He could not sleep. He was too stressed. There were too many ideas going through his head. He had been working too much lately. He could never sleep when he was stressed.

Natasha turned in her bed. She was asleep. She had been working hard lately. She always slept a lot when she worked hard. She slept a lot and dreamt weird dreams.

Pierre went out of bed and got dressed. It was no use trying to go to sleep. He would not be able to sleep for the next few hours. He decided to go for a walk.

Natasha found herself in a big and bright room in her old country. She was ironing shirts for the tzar — yellow, orange and purple Hawaii shirts with palm trees and beaches. The tzar was going surfing. It was one of those weird dreams.

Pierre closed the door carefully behind him. He did not want to disturb the quiet night. He walked along the quiet street, across the square and down Carrer de Torrijos. He enjoyed walking in the middle of the night. It was his escape from the busy city. He was not a nature person. When he needed some tranquility he did not go out of town. He went into the quiet part of town — physically or temporally.

Natasha was done with ironing Hawaii shirts for the tzar. She had left her Russia behind and was back in Barcelona. She was riding on the back of a pig through the empty streets of the city. She raced along Travesera de Gràcia, past the market and up Carrer de Torrijos. She had to use all her strength to hold on to the collar of the pig. She was moving at a high speed.

Pierre was startled by some noise that interrupted the otherwise quiet night. He looked down the street. Something was making its way up the street at a fast pace. It sounded like a herd of cows but it looked smaller. It looked like a knight riding an animal. He moved out of the way.

Natasha continued riding the pig up Carrer de Torrijos. She was going too fast. She was afraid to fall off the pig. From the corner of her eye she saw someone hiding in a corner. Was it Pierre? She did not remember ever seeing Pierre in her dreams before. She wanted to wave but she did not dare taking a hand off the pig’s collar. She was afraid to fall off. She was going too fast. Now it was too late. She had passed him by a big distance. She was swimming among colorful fish in the Pacific.

Pierre could not believe his eyes. Was he hallucinating? Did he just see Natasha go past riding on the back of a pig? Was he dreaming? He pinched himself. It hurt. He was not dreaming. We was awake but he felt tired. He walked back up Carrer de Torrijos. He returned home. He fell asleep right away as his head met the pillow.

Natasha swam among the colorful fish somewhere in the Pacific. Some fish were yellow. Some were orange. Some were purple. Just like the tzar’s Hawaii shirts she had ironed in an earlier chapter of her dream. She looked at the fish more closely. They all bore the tzar’s head.

Pierre took up the phone. He chose Natasha’s number. She answered.

“What’s with the pig?” Pierre asked.

“Oh that,” Natasha replied casually. “That was just a dream.”

“But I pinched myself,” Pierre said and sounded confused. “It hurt. I was awake.”

“Oh, you silly boy,” Natasha said laughing. “Of course it hurt. Of course you were awake. It was my dream. Not yours.”

“Oh! I see,” Pierre said and still sounded a bit confused. “I guess it makes sense. In that case.”

“Want to go for a coffee?” Natasha asked.

“Sure,” Pierre replied and felt that he needed a coffee.