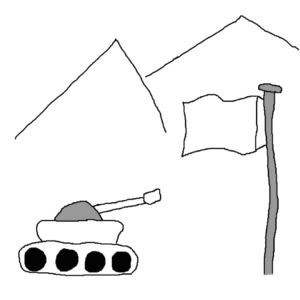 As Pedro entered the train he noticed that it was unusually packed for the time of day. He looked about him and miraculously spotted a folding seat that was occupied by a backpack. As Pedro approached the seat, the backpack’s owner, a young man in his late teens, looked up, smiled, removed his backpack and held the seat down for Pedro to sit.

“Thank you!” said Pedro, impressed by the politeness of the juvenile passenger. If only there were more like him in his generation. He was a shining exemplar.

The train started moving and Pedro made himself comfortable, took out his book and started to read. He really enjoyed being able to submerge himself in a good book on his way to work.

Pedro hadn’t read many words when he was interrupted by a low murmur of gunshots, explosions, shouts and cries. Someone seemed to be playing a computer game or watching a movie on their mobile phone without using headphones. This was outrageous. How could anyone disrupt the nice and quiet mid-morning commute with such an inconsiderate behavior? He had to do something to stop this.

Pedro looked up from his book and found out to his horror that the noisemaker was the friendly juvenile who had kindly offered him a seat. He opened his mouth but said nothing. He could not bring himself to scolding this young man who had been so nice to him.