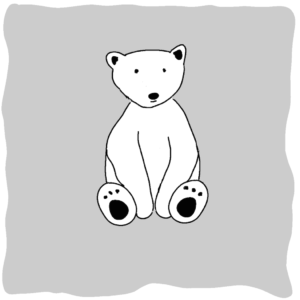 The Minister for Culture closes his eyes and puts on the virtual reality headset. When he opens his eyes again he finds himself standing on an Arctic ice field. An arrow-shaped wooden sign is anchored into the ground and engraved with the words North Pole. The minister’s gaze follows the direction of the sign and stops on a white blob moving about on the ice, almost invisible against the white background. He uses the joystick to zoom in and get a better view of the thing and discovers that it is a polar bear—the king of the Arctic.

The minister admires the big and strong animal. He has a thing for predators. That is how he wants to be seen as a politician. He wants to be feared—and not only because his mother is an influential figure in the leadership of the party.

“Take me away from here!” the minister suddenly shouts, turning away from the polar bear and bringing his palms to the headphones covering his ears as if he is trying to escape all awareness of the moaning animal.

The Minister for Culture finds himself floating up into the sky and flying slowly south across the globe, over Europe, across the Sahara Desert, and is dropped onto the eastern part of the African Continent.

The minister looks around the savanna. The hot sun is beating down on the grassland. Small and isolated trees and bushes are scattered around the horizon. In the distance, he spots a group of animals grazing on the dry pasture. He refreshes his elementary school geography—or was it biology—and guesses it is a herd of gazelles. Farther along the horizon he spots a big dotted cat quietly tiptoeing toward the gazelles. That animal he knows. He recognizes it without a doubt as a cheetah.

Suddenly, the cheetah jumps forward and starts running, only to come to an abrupt halt after a mere few meters, as if it has hit an invisible wall. It sits down biting its paw, looking toward the herd of gazelles. Finally, it stands up and casually trots back to its original spot where it lies down, resting its chin on its front paws, and a tear runs town its cheek.

The Minister for Culture takes off the virtual reality goggles and looks over to Yvette, the Chief Concept Designer of Studio Zero who is standing a few steps away with arms crossed over her chest, chin raised, and a proud smile across her face.

“What the hell is this?” cries the minister, holding up the virtual reality goggles and shaking them for extra emphasis. “What did I just see?”

“Well, this is what you asked us to do,” Yvette replies, her smile fading into a serious look. “It’s our initial concept for the Virtual Reality Zoo. As you most likely are aware, our brief was to create a virtual reality concept where people can explore animals in their natural environment but merge that experience with the most remarkable aspects of our long-standing cultural heritage of city zoos.”

The minister knows exactly what he asked for. He himself wrote the first draft of the brief, although the idea had been his mother’s and he’d asked the younger staff at the ministry to finish the brief and add all the technology stuff.

“Can you elaborate?” asks Yvette.

“For example, why are the animals behaving so strangely? I do not remember asking for that. And that is because I did not ask for that.”

“I see,” Yvette says, smiling and nodding her head like a patient schoolteacher. “Let’s take a step back. Let me explain our approach in more detail. As you saw, we’ve followed the brief literally and taken the natural environment of the animals as a starting point and background scene in our application. As for the cultural heritage of city zoos, the brief was vague and lacking in detail so we had to choose which attributes we found the most striking. On one hand we have confined spaces and on the other hand we have chosen mental stress. Brought together, this means that all the animals appear to be in their natural environment but their movement is constrained by invisible cages. They’re all stressed, nervous, and, quite frankly, demented to a greater or lesser degree—just as they are in our traditional city zoos all around the globe.”

“Why on earth would anyone want to see virtual demented animals?” the minister shouts, emphasizing his words with a mano a borsa hand gesture he most probably learned from the Godfather movies, but is completely out of sync with his own personality.

“I’d guess for the same reason they go to see real demented animals in real zoos,” Yvette answers calmly, placing her hands on her waist.

“But why demented?” the minister asks, slipping into a high-pitch squeal, as if he is going to cry.

“Well, the brief asked us to preserve the centuries-old cultural heritage of city zoos,” Yvette answers, in an assertive voice. “After extensive research and internal discussion between our concept designers and anthropologists, we’ve come to the conclusion that this is best achieved by confined spaces and mental illnesses.”

“No, no, no!” cries the minister. “That is not true! That is not what I wanted. I wanted… I wanted to see children petting… happy animals… kind and charismatic lion tamers… explorers… That is our cultural heritage… Confined spaces and mental illness… That is not culture! That is cruelty. That is just…”

The Minister for Culture does not finish the sentence but throws the virtual reality headset on the floor and storms out of the room, slamming the door behind him.