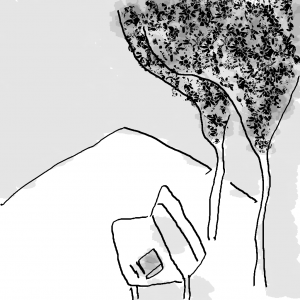 It was a Sunday morning in early August and the sun was high in the sky. I walked slowly along Carrer de Congost. I stayed on the side of the street where I could use the shade of the surrounding buildings to shield me from the sun. I passed the bar run by punks and squatters. Across the street was the headquarters of the Gràcia homing pigeon breeding society. I smiled at the idea that such opposites could co-exist in this small Barcelona street. On one side was an association with the dove as their symbol — the symbol of peace. On the other side was an association with a skull and crossbones as their symbol — the symbol of terror. On this quiet Sunday morning the only signs were of peace and terror living together in peace and harmony.

At the end of Carrer de Congost I turned left and then right again into Carrer d’Astúries. I was on my way to Virreina square. My favorite square in the Gràcia neighborhood. The square where I sat so often at weekends with a book in my hand, which was sometimes accompanied by a pen.

Once in the square I found myself a seat on a bench in the shade of a tree. The square was lively and yet at the same time it radiated tranquility. The terraces of all three cafés were fully occupied by customers whose murmur echoed around the square. On all the benches in the square there were people. Some were reading. Some were engaged in lively discussions with their bench-mates. Others sat in silence watching life as it evolved in the square. The life in the square evolved slowly in the August heat. People were careful not to move too fast in order to make the heat more bearable.

The church stood in all its glory on the mountain side of the square. As in other parts of the world there are four cardinal directions in Barcelona. Contrary to other parts of the world they are not called north, south, east and west. The cardinal directions in Barcelona are mountain, beach, right and left. The church door stood open. His kingdom is always open. Especially on Sundays.

There was a constant stream of people walking across the square. People walking their dogs. People on their way home with the sunday paper under one arm and a baguette under the other. Tourists — a middle-aged man and a woman — walking with a map in their hands. “Look! There is the church that we saw in the Barcelona tourist guide.” They stopped and took a photo before walking on in search of the next square. In search of the next item they had seen in the Barcelona tourist guide.

The pigeons flew back and forth across the square. They sat down on a ledge above the church door before flying over to the next tree. Their next stop was the facade of a house on the beach side of the square. The pigeons finished their circuit by flying back across the square to the ledge above the church door. Every now and then they came down to earth to look for breadcrumbs left over by the wingless occupants of the square. A young and inexperienced pigeon walked up to a cigarette butt. It realized immediately that the butt was not edible and walked over to the next butt to try its luck there.

I pulled a notebook and pen out of my breast pocket. I had the intention of trying to write a short story. I had not written anything for a long time. I was suffering from writer’s block. Whenever I sat down with the intention of writing, my head went blank and I could think of nothing worthy of putting onto paper. I had turned to the square in the hope that the fresh air would help me air out my brain and blow in fresh ideas.

I stared at the empty pages in the notebook in front of me. Barcelona, August 9th 2008, I wrote on the top of the left sheet. I got no further. I did not know what to write. I put the notebook in my lap and looked around me. I watched the two drunkards who sat on a bench across the square discussing life’s mysteries between taking sips from the cans of beer they had in their hands. They laughed. They were joyful. Their life was no bed of roses but who needs a bed of roses when one always seems able to scrape together enough coins to buy the next round of beer.

“You never put any money into the household,” I heard someone say behind me.

“Never!” the girl cried. She blushed with embarrassment and looked around her before looking at the baby to see if it had woken up. The baby slept. The girl lowered her voice and continued the discussion. “I cannot tell her about the baby. She would go mad. She would probably stop sending me money.”

“But what about your dad. He has buckets full of cash. Why don’t you ask him for money?”

“You know why. We have been through all this before. He has renounced me. He has never forgiven me for quitting my studies and moving to Barcelona.”

The young couple did not get any further with their discussion about the household budget. The baby woke up and started crying. The girl stood up. “Let’s go!” she said. “I need to go home to feed the baby.” I watched the young couple disappear behind one corner of the church.

From behind that same corner a jogger appeared. He paid no attention to the young couple with the baby. He was preoccupied with his own set of problems. He jogged through the middle of the square away from the church. At the other end of the square he took some time to make up his mind about where to go next, before turning right into a side street. This was the first time he had gone running since he had moved to Barcelona. He was completely lost. He looked to be facing a long run if he did not run into a familiar looking sight soon.

Hugo had gone to bed early and woken up early. He was now sitting on the terrace of one of the cafés reading a business newspaper. He wondered how he could make a profit from buying and selling stock. This was the third consecutive weekend that he had thought about the same issue. He had thought it would be easy. He had thought he could simply buy stock at a low price and make a profit by selling it at a higher price. He was about to discover that trading stock was not as simple as that. Over the last three weeks that he had been reading the business newspaper he had noticed how the price of some stock rose while the price of others fell. He had found no pattern in the movement of the price. It made him hesitant to start trading. He was afraid to lose quickly the small sum of money he had put aside for his stock trading adventure. He decided to abandon his idea of stock trading. He decided to use the money to buy himself a new camera. Who knew? Maybe he could make some money from selling photos.

“Look!” I heard someone cry to my left. “We are wearing identical shoes.”

I turned my head. I recognized the woman who was sitting beside me. She was one of the drunkards in the square. I saw her almost every time I was in the square. At first I had not realized that she was one of the drunkards. I had thought she was just a crazy old lady. Later I noticed her drinking together with the other drunkards. She was crazy for sure. Whether it was from old age or booze I did not know. I looked at her feet. I looked at my feet. We were both wearing sandals. Sandals as different one could imagine.

“Yes,” I said to the old lady and smiled. “You are right. We are wearing identical shoes.”

I turned the pages in my notebook and browsed back to the page where I had written Barcelona, August 9th 2008. A few densely written pages had been added to my collection of writing. I closed the book. I put the pen in my pocket. It was time to go home. I said goodbye to my sandal twin. I said goodbye to the square. I said goodbye to the people in the square and thanked them for the inspiration they had given me. I thanked them for the story fragments I had been able to put on paper today. I doubted any of the fragments would ever grow into a standalone story. That was however of no importance. The only thing that mattered was that I had started writing again. I could head home, content with the day’s labor.