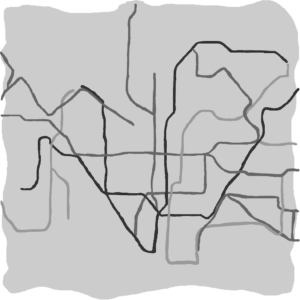 Philip walked onto the central platform of the Glòries station. It was early in the evening and the platform was not very crowded, making it easy for him to navigate to the farthest side. He had a preference for that end. He did not know why. It was not intentional or based on some elaborate reasoning, he just always found his way to that side without thinking about a motive. Maybe it was related to the fact that all his life Philip had had to contemplate his place among the people around him. What had been his place in his motherless home in the Cornwall countryside? What had been his place at his mother’s family’s home in Valencia?—where his mother had in fact been mostly absent as well. Maybe it was due to all that confusion and insecurity that he unconsciously chose to stake his own place on the platform among the people waiting. It was in his nature to carve out his own space.

Philip wiped away the pearl of sweat that had formed on his forehead since walking onto the minimally air-conditioned platform of the Barcelona metro system. The trains in the Mediterranean city were usually thoroughly cooled in the summer heat, but the platforms were an inferno. Philip reached into his backpack for a book and looked at the information screen. The next train would arrive in forty seconds, so he did not bother to open the book. The wait would be too short to get engaged with a character or a plot before being interrupted by the act of stepping onto the train.

“Did you know that female penguins leave their eggs with the male while they search for food for themselves?” asked a tall dark-haired woman standing next to Philip. She had a look of corporate success, wearing a neat suit and carrying a stylish briefcase.

“How do you know?” replied a short blond-haired woman with pierced eyebrows, wearing jeans and a T-shirt, carrying a worn backpack. A snake tattoo peeked out from under her shirt and seemed to be climbing up the back of her neck.

“Saw it in a documentary,” claimed the tall woman, glancing at her expensive-looking wristwatch.

“But that makes no sense. Wouldn’t it be better to send the bloke to look for food? Antarctic takeaway, or something?”

“Nah. That’s old fashioned. This is a kind of declaration of independence. Girl power.”

The two women could hardly look more different from each other and Philip wondered what their relationship was. Judging by the location and time of day, he would have guessed they were colleagues, but based on their highly diverging outfits, it was more likely they were friends—or lovers.

Philip was not able to follow the rest of the women’s discussion through the noise of the train that rattled from the tunnel into the station, sending a squeaky sound through the air as the brakes gripped the wheels.

Philip leaned against the door of the train and opened his book. His travel companion these days was a collection of short stories by W. Somerset Maugham—a book he had stumbled upon in a secondhand English bookstore a few days earlier. As the train started moving, he dove into the story he had been reading on his commute to work.

Who was Mrs. Hamlyn again? And Pryce? What were they doing on this ship? Philip could not remember. The commute between home and work was so short, and broken up by changing platforms to get from one train to another, that it was usually filled with unfinished stories and Philip always had to spend some time picking up the thread where he had left it on the last commuting stint. He browsed the previous pages and glanced over the text to reacquaint himself with Mrs. Hamlyn and Pryce. Gradually, the characters and setting came to life and he was ready to continue reading.

He had hardly finished the first paragraph when his attention was interrupted by a phone starting to ring. Philip lifted his head and kept still like a dog listening to footsteps in the distance. It was not his mobile so he turned his attention back to the story. The phone kept ringing. He could not concentrate on reading and looked up again.

On a bench, diagonally opposite from where he was standing, a young woman sat holding a mobile in one hand and staring at the screen. The phone rang. The woman stared. “Stop ringing!” her facial expression seemed to shout at the phone. She looked paralyzed by fear. Fear of answering the phone. She just sat there staring while the phone kept ringing. Why did she not answer? Was she hiding from someone? From her husband? Her mother? Her boss? The authorities?

“She doesn’t like dogs!” said neither Mrs. Hamlyn nor Pryce as they passed each other on the deck, but a young man who had entered the train at the Arc de Triomf station.

“Seriously?” asked the young man’s companion. “How do you know?”

“That’s great news, man! You think it has a future then?”

“Don’t know. I mean. There’s hope. I mean, with the dog question out of the way and all that.”

The men moved to a pair of empty seats that had become available and Philip returned to Mrs. Hamlyn and Pryce. Finally he could get on with his story and make some headway into the plot.