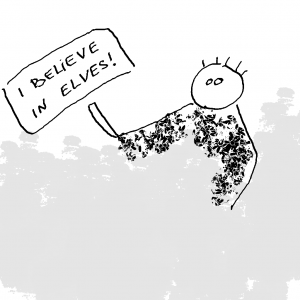 I sat down on a bench in Vondelpark. The sun was shining. I wiped sweat from my forehead. I had recently abandoned the Icelandic summer and moved into the Dutch autumn. The autumn being considerably warmer than the summer. I had difficulty coping with the heat. Having lived the first twenty-four years of my life in Iceland, I was not used to this sort of heat.

I sat with a notebook in my lap and a pen in my hand, with the intention of writing a script for a short film about parklife in Amsterdam. However, my mind was blank. I could not squeeze out a word. The page was equally blank. Was it the heat that caused my writer’s block? Or was there too much turmoil going on in my head? Turmoil caused by the recent changes in my life.

I was starting a new chapter in my life. A chapter in which I hoped to become richer in creative content than the empty page in the notebook I had in front of me. It was the first autumn of the new millennium. I had left sparsely populated Iceland behind me and moved to densely populated Netherlands. A few months after finishing a degree in mathematical logic, I was about to start a course in film making. I had left the scientific world behind me and was heading into an imaginary one. It was not the stereotypical educational path.

I looked up from my empty notebook to the man who had sat down beside me. Talking about stereotypes. Although I assumed he was a local, he was not what you would call a stereotypical Dutchman — the tall, slim blond — he was short and chubby with sweat running down his bald head. He had sat down beside me to catch his breath. He had been running.

“Sorry, I don’t speak any Dutch,” I replied in English. I was sure he had said something about it being warm or something, but that was all I had got.

“Oh, I just said it was still warm,” the Dutchman repeated, this time in English.

We sat in silence and watched the life in the park. I with my blank mind. He with his bald head. He trying to catch his breath and squeeze it down into his lungs. I trying to catch the spirit in the park and write it into my script.

“Where are you from?” the Dutchman asked.

“Wow. As far as I can recall, this is the first time I have met someone from Iceland,” the Dutchman said, still nodding his head as if he was trying to convince himself that he had indeed met a specimen of the rare species known as Icelanders. “Do you know Björk?”

What? I hesitated. What sort of question was that? I knew of course that Björk was famous all over the world, but I still thought it was an odd question. It was like me asking if he knew Ruud Gullit. It was a long shot.

“So it is not true that everybody knows everybody in Iceland?”

“No, not really,” I replied thinking of all the Icelandic people I did not know. “It is not even true that most people know most people.”

“Huh,” was all the Dutchman had to say. He raised his eyebrows and looked a bit disappointed that I had not confirmed the myth about the small and tightly woven social network in Iceland.

I hesitated and wondered where I was going with this argument. The Dutchman nodded his head and waited for me to continue the thought.

I was rather pleased with my response. I thought it was fairly funny. Well, if not funny then at least witty.

“No, I don’t think so,” the Dutchman said with a serious face.

We sat in silence. I was a bit taken aback by the Dutchman’s lack of response to my wit. Perhaps it had not come out right. Perhaps it had simply not been funny. I hesitated to continue the discussion and decided to go back to my script. Or rather, I went back to the blank piece of paper that was supposed to become my script. I had yet to put the first word onto the page. I looked around the park in search of inspiration. Arguably, I could not get a better source of inspiration for a script about parks in Amsterdam than looking around a park in Amsterdam. Yet I could not get a single word out of my pen.

“But tell me,” the Dutchman said, his face lighting up as if he had just remembered something remarkable. “Is it true that Icelandic people believe in elves?”

“Yes,” I said hesitantly. I had not anticipated this question either. Was it really elves and Björk that symbolized Iceland in the eyes of the world?

“Really?” the Dutchman said with questioning eyes. “Everybody?”

“No, maybe not everybody,” I said and tried to remember if I had ever seen statistics about how many Icelandic people believed in elves. I did not come up with much. I recalled having seen some numbers at some point about the percentage of Icelandic people who believed in elves. However, I could not even remember in which ballpark the percentage was. It was not as if this was a hot topic in Iceland. The pollsters were interested in more serious subjects such as the popular support for the government or whether or not Iceland should join the European Union.

“And you?” the Dutchman asked grinning. “Do you believe in elves?”

I hesitated. For a moment I thought that this question called for some contemplation. I had lived twenty-four years in Iceland without having to make up my mind about whether I believed in elves. The occasion had never arisen. I had never been involved in moving large rocks or tunneling through mountains — the main activities affecting the presumed habitats of elves and thus instigating interaction with them. I did not even know if Iceland should join the European Union. The question about the existence of elves was even farther from my mind.

I felt slightly overwhelmed by the fact that I had to make up my mind. In my life I had not experienced anything that suggested the existence of elves. Yet, neither had I experienced anything that gave me grounds to argue against their existence either. Maybe it was the same with elves as with penguins. Even though I had never seen one, it did not mean that I doubted their existence. Yet, maybe penguins and elves were not comparable. Anyway, I had to make up my mind. I had to answer the Dutchman’s question. To believe or not to believe — in elves — that was the question.

“Yes,” I replied firmly, more based on instinct rather than conviction. “And the feeling is mutual. Elves believe in me too.”

I did not know where the latter statement came from. It was just something that had spontaneously popped into my mind.

“Really?” The Dutchman looked surprised. In a way, I could not blame him. I was quite surprised myself. “But why?”

That was a good question. As my answer had been based on instinct rather than on careful reasoning, I was not prepared to argue my case.

“Why not?” I replied, fully realizing that answering with a question was not a satisfying answer. “Believing in elves causes no harm, and it might be fun.”

In my mind I recalled a recent news item I had seen about school children singing for the elves in a reconciliation meeting. Workers had been blowing up rocks on the slopes of a mountain above a fishing village in north-west Iceland. Something went wrong and rock fragments rained down over the village. A school teacher argued that this was the work of the angry elves whose habitat had been destroyed by the explosions. He took his pupils to the construction site and organized a concert where the children sang for the elves. I had thought it was a nice gesture. Regardless of the existence of elves.

“But it makes no sense,” the Dutchman replied. “How can you believe in something that does not make any sense?”

I wondered if there was no way of pleasing this guy. First, he seemed disappointed by the fact that I had downplayed the myth about the density of the Icelandic social network. Now, he seemed disappointed that I had confirmed the myth about the Icelanders’ belief in elves. I had to try to find a convincing answer. I could play the the penguin card. However, it was possible that the Dutchman had at some point been to South America — or to a zoo. Hence, he might have an easy answer to the question about the existence of the mysterious and supernatural species known as penguins. Thus, I decided to take another route.

“I guess it is a bit like believing in the royal family,” I said, immediately realizing that I might have chosen a delicate subject.

“But that’s different,” the Dutchman exclaimed. “The royal family exists. Believing in elves serves no purpose.”

Of course the Dutchman was right in the sense that believing in elves had no functional purpose. Not in our fact-driven and rational modern times, at least. He had however touched a sensitive nerve. For some reason I felt obliged to defend the elves. I felt obliged to defend imagination against functionality. I felt the obligation to defend my current existence against my past. To defend the joy of the imaginary world against the utility of the real one.

“Doesn’t the same go for royalty?” I said “Does believing in the royal family have a purpose?”

The Dutchman did not answer right away. I wondered if I had gone too far. Perhaps, discussing the utility of the royal family was a sensitive topic.

I knew that argument well. We used it in Iceland in the context of the Icelandic president. The president whose role was comparable to an elected monarchy.

“But can’t elves perform the same function?” I said, still thinking of the role of the Icelandic president. “Can’t elves function as the unifying symbols of a nation too?”

I thought that I was on to something. There seemed to be some parallels between seemingly unrelated concepts.

“But also,” the Dutchman exclaimed. “The royal family is the symbol of the Netherlands in the eyes of the outside world.”

I could not help grinning. The Dutchman had unknowingly given me yet another parallel between elves and kings. As far as I could work out from this discussion, elves — and Björk — symbolized the Icelandic nation in the eyes of the outside world.

“In the case of Iceland,” I said with a grin on my face. “Elves symbolize the Icelandic nation in the eyes of the outside world.”

I stood up and said goodbye to the running Dutchman. I was off to find another bench where I could elaborate on my current inspiration and write a short film script about the parallels of elves and royalty in our modern society.