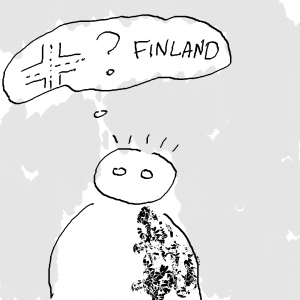 It was a bright and sunny July morning in Barcelona. The sky was blue and there wasn’t a cloud in sight. It was hot — unusually hot — but less humid than one would expect for an average July. It was no average July. It was July alright, but outside the mean. To some, it was mean outside — depending on the angle from which one looked at the weather. The city was quiet. The night owls had not yet woken up and the people who ventured outside moved around slowly in order not to exhaust themselves in the heat.

Two men sat at a table on the terrace of a café in Virreina square. They tried to combat the heat by drinking cold beer. Some readers might raise their eyebrows at the idea of drinking beer so early in the morning. As an experienced narrator, I can however testify that I have seen worse behavior, and in the case of those two young gentlemen I can promise the readers that they are decent gentlemen who will not be harmed by a beer or two — even at this early hour. One of the men was dark. He had dark hair, brown eyes, and uniformly tanned skin. Probably a local. The other — despite having eyes whose color perfectly matched the clear blue sky above — did not fit as well into the stereotypical Mediterranean scene. His hair was blond and his skin was white, with a slight hint of pink — most likely caused by the sun rather than the beer. One would have guessed he was Swedish or Norwegian. At least from a place considerably north of the Mediterranean.

A car stopped in the middle of the street that ran along one side of the square. The driver shouted at one of the passers-by.

The driver got out of the car, ran to the passer-by and hugged him. Apparently they knew each other and had not seen each other for a while. They were happy to see each other. The other drivers however, were not as happy with this encounter and started to honk their horns.

The driver stopped hugging the passer-by and shouted to the other drivers that he would be moving on in a minute.

The other drivers shouted insults back and continued honking their horns. The normally quiet square became noisy. Possibly waking up a night owl or two.

“What is the traffic like in Finland?” asked the man who one would guess was probably a local.

“Iceland?” replied the blond who one would have guessed was either Swedish or Norwegian. “Did you mean to ask what the traffic is like in Iceland?”

“Yes, of course.” The local looked surprised. “What else?”

“Why do you always say Finland?”

“I most certainly do not,” the local exclaimed and tried to look offended but due to bad acting skills he just looked silly. “Just five minutes ago I said Greece. I don’t always say Finland.”

“When I say always, I don’t mean always as in always,” said the blond and hesitated for a while as if to think whether what he had just said had really been what he had meant to say. “I mean, you always say Finland this and Finland that when you refer to my home country.”

“Do I?” asked the local looking genuinely surprised. No acting skills were needed this time. “Did I say Finland just now?”

“You said Finland just now,” replied the blond and sighed. “And yesterday. And last week. And the week before that.”

“And the week before that?”

“And the week before that!”

“I don’t remember.” The local looked unconvinced about the wild accusations made by the blond. “Did I really say Finland?”

“Yes, you really said Finland,” replied the blond trying to sound slightly annoyed like some people get when answering repeatedly silly questions asked by children. Like the local, the blond wasn’t a good actor either. “But you are not the only one. For some reason, many people mistakenly call me Finnish even if they know very well that I am Icelandic. They also repeatedly talk about Finland this and Finland that. It is weird.”

“Weird indeed,” the local replied and rubbed his chin as if he was thinking very hard about something.

The two men were silent for a moment and sipped their beer. Both of them looked as if they were thinking. The presumed local rubbing his chin, and the man who one would guess was either Swedish or Norwegian scratching his head. They both stared at their beer seemingly hoping the bubbles would bring some knowledge to the surface that could help them shed light on the weird situation.

The square was quiet again. The drivers had stopped honking their horns long ago. The driver and the passer-by had said their goodbyes and the traffic was not blocked anymore.

“Are you sure it isn’t you?” the one that one would guess was a local asked suddenly.

“Me?” the blond replied and raised his eyebrows as if he wanted to underline his incomprehension of the question. Again their acting skills let the men down.

“Yes,” replied the local. “Since going on about Finland this and Finland that is not really restricted to me, but is a general trend, have you ever wondered whether it could be you?”

“You mean that I hear Finland instead of Iceland?”

“Well, yes. That could be it …” the local paused a bit before continuing. He did not look entirely convinced whether he should continue at all. “Or it could be that you are really Finnish.”

There was another moment of silence that both men used to sip their beer in the hope they could consume some of the knowledge the bubbles might have brought to the surface.

“Ever heard about the wisdom of crowds?” the local asked.

“The basic idea is that often an uninformed crowd can collectively be wiser than a single expert.”

“So, …” the blond hesitated for a while as if to comprehend the wisdom put forward by the local. “You are saying that since a crowd frequently refers to me as Finnish, I should question my own expertise in determining my own nationality?”

“It is just a theory,” the local said shrugging his shoulders.

“I don’t think so,” said the blond shaking his head.

“Well. You are probably right,” admitted the local with a frown — which turned quickly back into a smile as if he had been struck by a brilliant idea. “Maybe it is probability.”

“Yes,” replied the local and looked excited about elaborating on his idea. “People know that you are Nordic but not Scandinavian — in the Scandinavian Airlines sense of Scandinavian. If you put all non-Scandinavian Nordic people into a hat and draw one at random then you are much more likely to draw a Finn than an Icelandic person. Therefore, many people accidentally refer to you as Finnish. They can’t help it. It is just the law of probabilities.”

The man who one would have guessed was either Swedish or Norwegian shook his head in disbelief and stared at the local. The local stared back.

“How long have we known each other?” asked the blond.

“Six months,” answered the local, and now it was his turn to look puzzled. “Why?”

“We have known each other for six months and yet you still consider me to be just some random non-Scandinavian Nordic person drawn from a hat?”

“Well, I didn’t mean it like that,” the local replied, and his uniform tan went slightly red. He looked embarrassed. “You know what I meant.”

“Ja, ja,” admitted the blond with an accent that one would only associate with someone from either Sweden or Norway. He smiled and seemed to know exactly what the local meant.

“Anyways, what is your answer?” asked the local.

“What was the question?” asked the blond who had apparently forgotten the question that had originated the whole discussion.